As I signed up for Me-Made-May'12, I thought it would be a good idea to tidy up my wardrobe, which was in a terrible mess. I was sure it may be too difficult to overlook my self-made garments to chose.

I took me almost the whole morning, but I like it much better now.

There is a bunch of garments that have to go (self-made ones included). Either they became too small (too much chocolate, ahem), or they don't reflect my personal style anymore, and two or three of them were even never worn. What on earth was I thinking when I bought them??

In the back of the wardrobe I found something nice: a pair of dark blue gabardine trousers, one of the very first garments I ever made about six years ago! I wore them a lot at that time, but now they are a bit tight around the hips, and too short. I keep them for sentimental reasons, though.

I was frightened when I put all my self-made, season appropriate tops together: there are only seven pieces, and one of them was never worn since I made it in 2005! I can see now that may will be a very hard month... But I also think that this is one of the goals of taking part in this challenge, to see what I need more of in my closet... 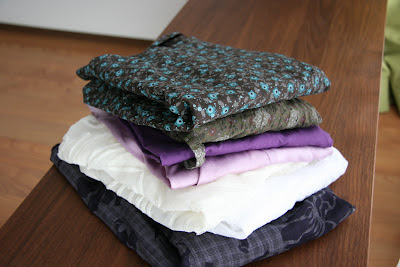 Email ThisBlogThis!Share to TwitterShare to FacebookShare to Pinterest
Labels: About me, Me-Made-May'12

If you don't like to read my bad English: 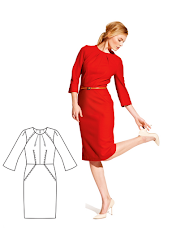